Roman cameos with female busts from Middle and Lower Danube

During the archaeological excavations of the necropolis in Roman Viminacium in 2006, at the site Pirivoj, in a freely dug in grave, on the chest of a deceased woman, on the left side, was found a cameo in a gold medallion (Nº 25), hanged on a necklace consisting of 170 beads made of black paste. On the chest of the deceased woman there was also a bronze coin of Iulia Domna (211‑217), and on the fingers of the left hand there were two rings, one made of black glass-paste, and the other made of gold, with an inserted stone of red color.1 On the cameo of oval shape, made of two-layer opal, with the light-blue background, in the white layer is represented in relief a bust of a female person in the profile to the left. The lower parts of the face and the chin are missing. The eye is big, almond-shaped and wide open. Special attention is payed to depicting the hairstyle. The hair, represented by thin incisions, is following the line of the forehead, falling behind the ears down to the end of the neck, where it is braided in a plait, which is at the back of the head bent twice. The plait is marked by the incised X ornaments. The woman is dressed into a transparent tunica, under which the breasts are discernible. The dress, whose oval edge under the neck is marked in relief, is fastened on the right shoulder with an oval buckle, so the upper part of the arm is not covered. Over the left shoulder is thrown a cloak, richly gathered into folds, which, going under the breasts, covers the right arm above the elbow and goes up to the neck. The folds on the cloak are modeled in relief. The cameo is inserted into a cassette made of gold tin, whose horizontal frame is decorated in relief with the motif of stylized palmettes. On the top is applied a wide, gouged, suspension loop. The medallions with analogously decorated frames are well represented not only in Viminacium, but also at the other sites on Danube.2 The find of this cameo in the gold medallion inspired us to return again to the theme of cameos with the representation of the female bust, very numerous finds on the Middle and Lower Danube and relatively rare in the other parts of the Empire. Although about these finds it has already been written in the scientific literature,3 our opinion is that they should be researched in more detail, that the possible workshops in which the cameos were produced should be determined, and that their function should be observed looking at them in the context of the historical circumstances at the time when they were made. Because, besides the newly found specimen these finds are already published, we will not describe them in detail, but we will try, on the basis of the way of combing the hair of represented women, to determine the time of production of these cameos and to represent them in their chronological sequence. Although, in contrast to the summarily treated faces, the female hairstyle on the cameos is represented in detail, authentically reflecting the fashion dictated by the empresses, there are some imprecisions in defining certain specimens, because the empresses in the course of time were changing the way of combing their hair, and sometimes more of them had the same or very similar hairstyle.4

Full article can be found

Roman cameos with female busts from Middle and Lower Danube 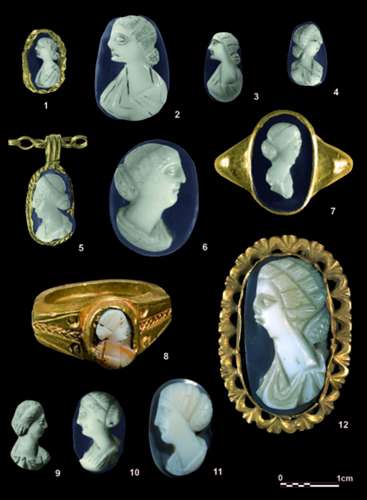 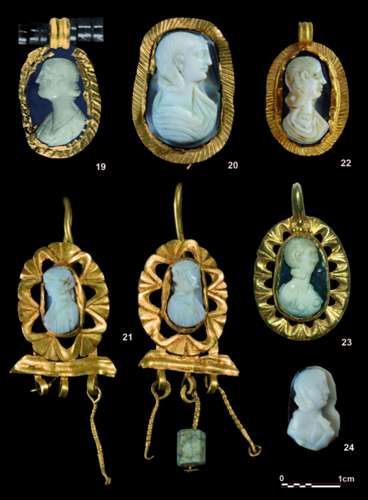