Roman Gold and Hun Kings: the use and hoarding of solidi

Tribute and the giving of gifts: Attila the Hun and Priscus of Panium

Much of the evidence for the nature of the relationship between Roman Emperors andHun kings comes from the historian Priscus, who was a member of the embassy sent by the imperial court in Constantinople to Attila’s royal encampment beyond the Danube in 449 and whose account is one of the most remarkable documents to survive from Late Antiquity. Priscus was born in Thrace, probably between 420 and 430, during the reign of Theodosius II. He had received a formal Roman education, became a civil servant in the imperial administration in Constantinople, and accompanied the Roman envoy Maximinus on his embassy to Attila (the king had demanded Theodosius II send representatives to discuss the failure of the Romans to fulfill the conditions of the treaty signed in 447). After returning from this mission Priscus traveled in an official capacity (possibly as rhetor) to Rome, then to Damascus with Maximinus again, before returning to Constantinople in time to witness the rioting in the city in 453. Priscus recorded his travels and experiences in an eight-volume contemporary history (sometimes referred to as the History of Byzantium), which was popular at the time. Unfortunately, only fragments of this invaluable account survive, though Priscus’history was used as a source by many other writers such as Jordanes and John Malalas (and the compiler of the Byzantine Suda).

Roman Gold and Hun Kings: the use and hoarding of solidi in the late fourth and fifth centuries 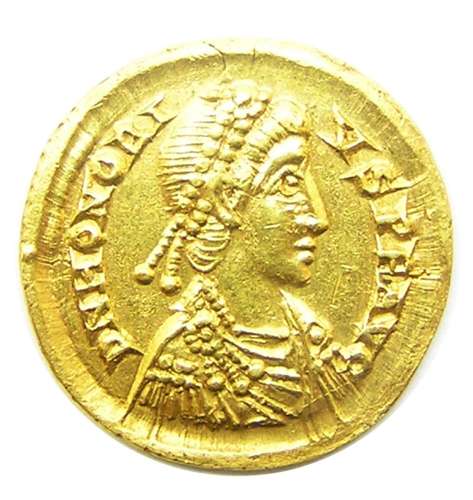